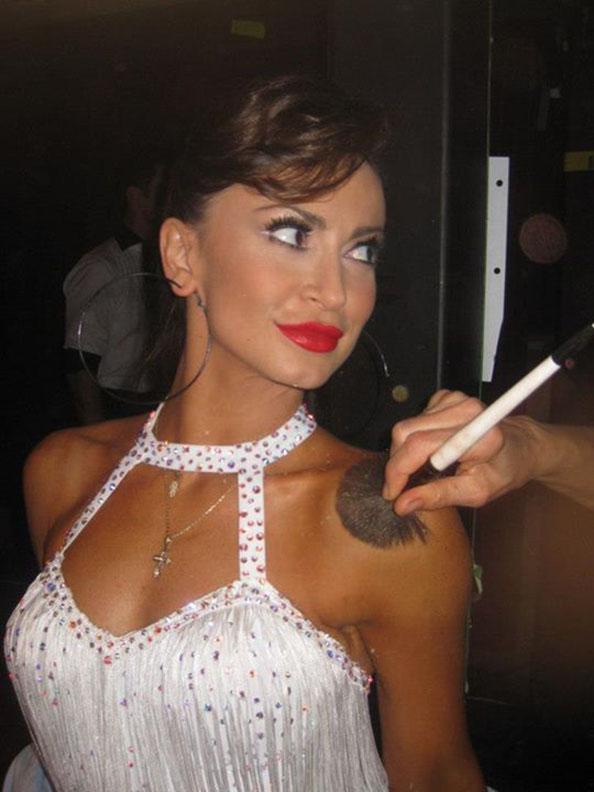 A new season of Dancing With the Stars officially kicked off last night and behind every skilled dancer is a team of talented makeup artists making all the right moves—not unlike the intricate floor routines seen on camera.

Head makeup artist Zena Shteysel has been with the show for its entire run, with two Emmy wins as a testament to her impeccable handiwork, but with factors like quick movements, hot stage lights, and sweat coming into play, the pro has seen her fare share of beauty mishaps.

“We’ve had a few of those—hair comes undone during the dance, we’ve gotten red lipstick smeared on the face, sometimes makeup will get on the men’s white shirts, and since it’s live, there’s only so much you can do,” Shteysel tells InStyle. “We do our best to prevent it, and if we ever see lipstick on the teeth or anything like that, as soon as the camera is off or they cut to commercial, we are in there fixing the problem.”

Shteysel and her team rely on long-wearing products, which get sorted by look into a magnetic Z Palette ($20; zpalette.com) to keep each star looking flawless, but the commercial breaks become essential for touching up. As if the NASCAR pit crew were armed with makeup brushes, roughly three artists work on each dancer and celebrity before the live taping resumes. “Once I’ve created a look, I put all of the products I’ve used into a Z Paltte, which makes everything so much easier and faster,” she says. “When you have everything right there, it only takes a minute or two to fix everything during the commercial breaks where time is of the essence.”

Don’t expect to see any body-bronzing mishaps, though. Thanks to the cast’s weekly tanning regimen, Shteysel and her team have the process down to a science. “We have what we call spray tan Sundays, where everyone comes in on Sunday to get tanned,” she tells us. “We have two body makeup artists who take care of the whole cast, and we also use the South Seas Island Glow Body Bronzer ($26; southseasskincare.com) to give shimmer at the base and make everything look flawless.”

From start to finish, it takes the team two hours to complete a look, though the body makeup is the first thing to be applied. “We do that first so it sets throughout the day as they’re practicing, and won’t transfer onto the wardrobe,” says Shteysel. “Once everything is dry and the costumes are on, we apply the Glow Body Bronzer, and work around the outfits.”

Even if you don’t plan to cut a rug like the current celebrity cast, the body bronzing tip is one that can be incorporated into your routine through spring and beyond. Before applying a layer of the South Seas Body Bronzer, Shteysel has every star exfoliate their skin to impart the most even coverage possible. She and her team follow by applying foundation to areas that need a little extra love—like over bruises from practice sessions, or to contour a chiseled set of abs—then top off with a layer of spray tan, and an extra coat of bronzer if needed.