DWTS MUA Reveals How the Dancers Get So Tan

The ‘Dancing With The Stars’ makeup department works with South Seas Skin Care, using several of the brand’s tanning products. 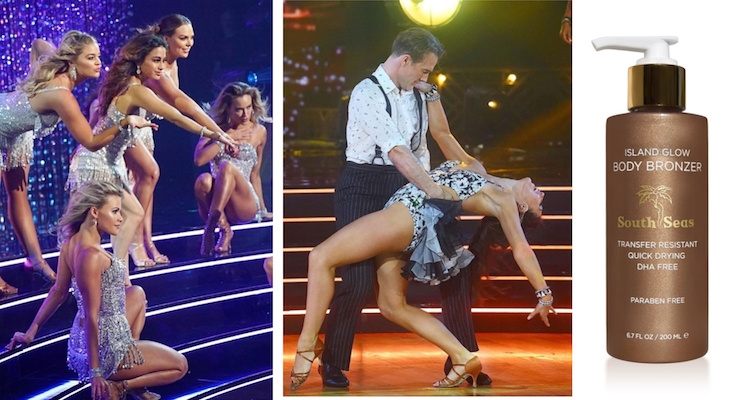 The Dancing with the Stars (DWTS) pro dancers and contestants always sport sun-kissed skin. A golden tan looks equally attractive on both a man’s bare chest and a women’s curves — especially when highlighted by a barely-there sparkly dress.The television show’s makeup department has revealed the secret to everyone’s sexy golden glow — working with South Seas Skin Care and its founder, Julie Nostrand, for the past 16 seasons.

‘The DaVinci of Spray Tanning’

The company says Nostrand is called “The DaVinci of Spray Tanning.” Every Sunday during the DWTS season, cast members line up outside Nostrand’s door at the television studio — waiting to get a golden glow.

Nostrand says she personalizes her spray-tan method based on each contestants’ body type and the costume they are performing in.

In less than 5 minutes, each dancer is perfectly sprayed with a beautiful, bronze tan. The spray tan develops overnight — and then each performer wakes up on the day of the live show feeling confident and motivated, she says.

Applied by hand, the products deliver a powerful kick of bronze color and dries to the touch in less than 15 seconds. Mother of Pearl has a sheer finish and adds an extra boost of sparkles.

Both products are transfer resistant, which is critical for the costumes.

Preparing for the Tour

In December 2019, South Seas will hand-select spray tanning technicians for the DWTS Live Tour which is scheduled to appear in 70+ cities.

With a network of 4,000 locations, the company has formed relationships with highly reliable bronzing artists across the United States. After showing a successful track record, DWTS trusts that the South Seas color for every cast member will mimic what is created on live TV.

Photos: Scenes from the show – the DWTS dancers, via Instagram/dancingabc